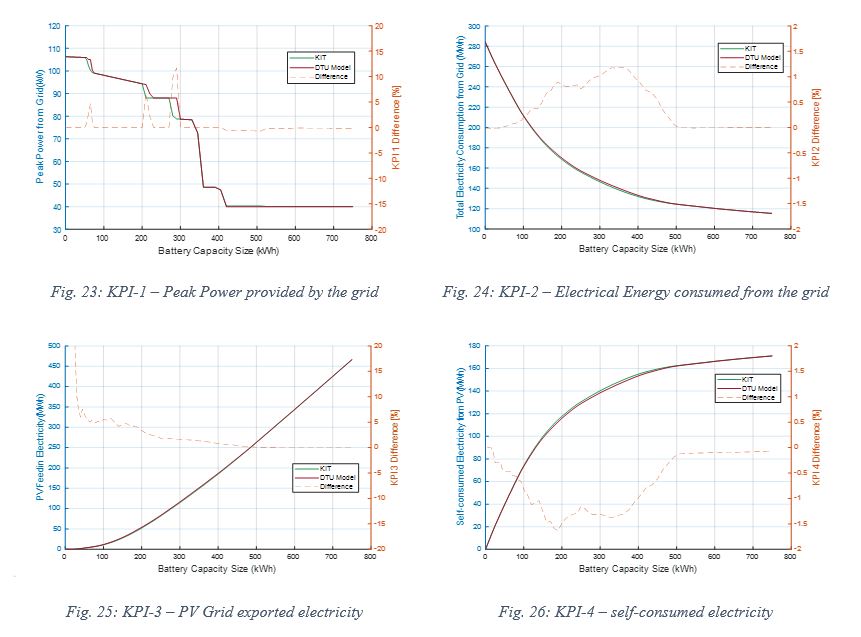 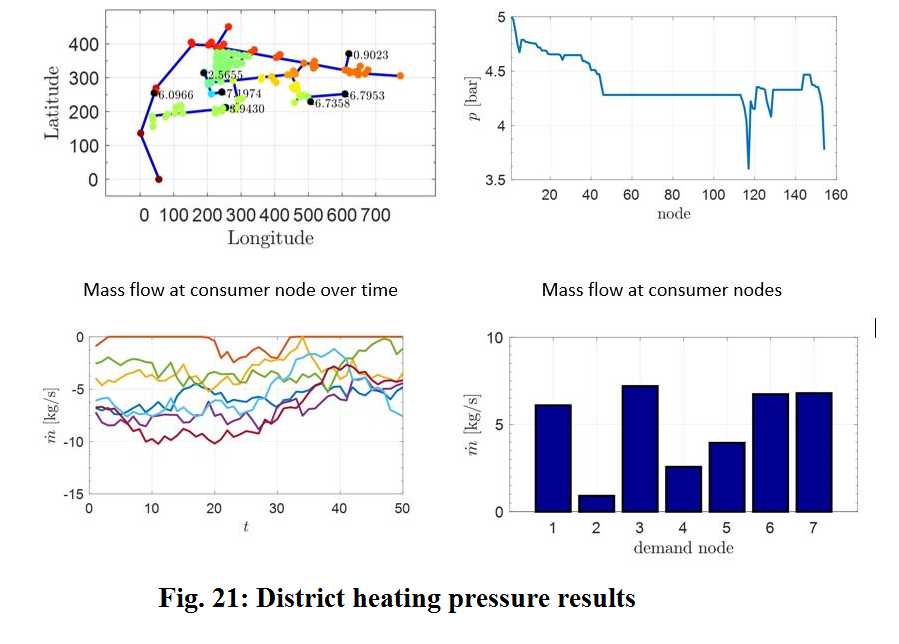 The two main parts of the Nordhavn system configuration are a district heating network (DHN) and an electrical grid, which are coupled through conversion devices such as boilers or heat pumps. DTU uses a co-simulation approach for simulating the different domains in a joint fashion.

KIT utilizes Matlab and Simulink for modelling, simulation, as one of KIT’s simulation-focus is optimal and predictive control for energy systems, and Matlab is well suited for these kinds of simulation. Both techniques, optimal and model predictive control are well suited for an effective operation and optimal control of energy grids. Additionally, extremely useful external information such as weather forecasts and technical limitations like power transfer limitations can be considered in a model predictive control approach. For MPC, a model is required usually coming in form of an ordinary differential equation. Here, the model should capture the relevant physical effects but at the same time should be simple enough to render the resulting numerical optimization problems tractable. This is especially important in case of electrical and thermal grids as they can become large adding additional computational complexity.

By the implementation of Nordhavn’s model into KIT’s tool chain two aspects of the cross simulation could be answered.

Next to the transfer of Nordhavn’s distributed network of into KIT’s tool chain the large quartier of Nordhavn was described as PreCISE model, downscaled and replaced KIT’s battery model in the SmartFab section of the simulation. Although the battery model of Nordhavn is of low complexity, transferring models can be tricky, as can be learnt from the citation of the PhD-student involved in the implementation in Matlab/Simulink:

“It was just a tiny stupid problem, but took me almost 3 hours to find what the real problem was. The delay unit in our system was “continuous”, it had to be changed to “discrete” for DTU’s battery model. The whole battery capacity is different with this wrong type of delay.”

As the model grows, the complexity of the individual components decrease. This is true also for DTU’s battery model of Nordhavn. The main differences of the two models can be categorized as followed:

Fig. 22 depicts the simulation results of the SoC for both batteries operation over time in the SmartFab. The battery model of DTU (red line) provides quite comparable results compared to KIT’s model (green line). However, in order to better understand the differences of the two battery implantations, we defined four different key performance indicators. KPI-1 represents the peak power, KPI-2 the total electricity consumption from grid, KPI-3 the exported PV electricity and KPI-4 the PV self-consumption.

Fig. 23 shows the peak power for KIT’s (green line) and DTU’s (red line) imported from the grid. For specific battery capacities DTU’s battery is depleted during the operation and hence, the peak power imported by the grid is higher. The maximum relative difference accounts for 10 %. Fig. 24 and Fig. 26, KPI-2 and KPI-4 contemplate accumulated energies, hence both KPI’s have a relatively small error of approximately 1%. Regarding KPI-3, the PV energy exported in Fig. 25, the error is especially pronounced with very small battery capacities close to zero kWh due to numerical issues (Div by 0). At higher capacity values, the relative error gradually converges to zero. Fig. 27 shows the comparison of the SmartFab/FlexOffice overall objective function with two different battery models. The difference is negligible.

Not considering the dynamic behavior of the battery, this implementation of DTU’s battery accelerate the test case considerably. The difference in the complexity leads to significant disparity in simulation speed. For a simulation of the test case, a single simulation with KIT’s battery model takes more than 20 minutes to run, by contrast, with the substitution of the battery from DTU, the simulation complete in about 40 seconds. Since the error is within an acceptable range, using this simpler model provides possibility of further optimizing battery control strategy and renewable generation matching.